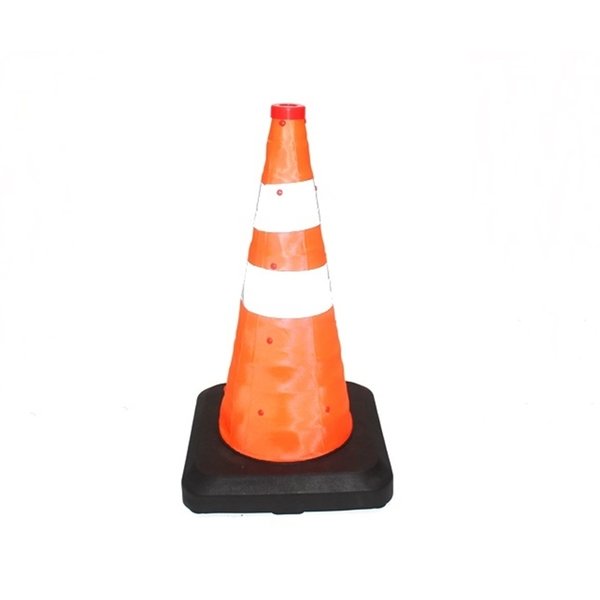 Orange traffic cone with weighted rubber base and LED light

Our collapsible traffic cone folds neatly away in its base due to its internal harmonica system. The cone body completely disappears in the weighted rubber base so that the cone is only 5 cm high when fully collapsed. This saves up to 80% space when you store the collapsible cone in your car.

The base of the cone has an integrated LED light that operate with two AA batteries (not included). If you activate this light by means of the switch on the underside of the foldable cone, the cone body is lighted up by the flashing LED, which increases the visibility of the cone at nighttime.

The weighted base of the collapsible cone ensures that it remains stable and can be used perfectly in windy conditions or alongside passing traffic. The base also has a number of built-in supports so that the underside of the foldable cone does not rest flat on the ground. As a result, rain can flow freely without dragging the cone. The base of the collapsible traffic cone also protects the cone body and the reflective bands when the cone is stowed away and keeps your collapsible cone looking new.

On the underside of the base you can place two AA batteries in a small battery holder. You will need a small screwdriver for this. Next to the battery holder you will find a switch that activates the built-in LED flashing light.

This cone is therefore the ideal solution if you are looking for a stable, highly visible cone that only takes up a minimum of space when you do not need it.

was added to your shopping cart